We had over 40 people attend our hosting of the Secret Roll Club on January 21st!

“The Secret Roll Club is a group of athletes that started rolling together to escape the strict rules of traditional Jiu-Jitsu schools. What started off as a handful of friends, has blossomed into large events with DJ’s, charity food drives, and prize giveaways.” – https://www.thesecretrollclub.com

There were awesome vendors here including:

* DaMuffinMan – Amazing muffins for pre and post training, baked fresh daily and delivered to your door! His Apricot Turkey Bacon muffins were the bomb. (www.badassmuffins.com)

In addition to three hours of open mat rolling and socializing (with the DJ playing an awesome Wu-Tang mix in the background), there were demonstrations by Sifu Phil and Sifu Anthony on the art of Jeet Kune Do and Kali. Sifu Phil spoke about why Brazilian Jiu-Jitsu is an essential part of our training as Jeet Kune Do practitioners here at Unlimited Martial Arts in Brooklyn, NY. As Jeet Kune Do students, we emphasize training in all ranges of combat, which includes grappling. We aim to become well-rounded and well-prepared warriors ready for any type of fight. We train the striking arts like Muay Thai kickboxing and Filipino Panatuken to refine our stand-up game. We train Filipino Kali and SAMI Combat Systems to learn how to utilize a weapon in combat. We train Brazilian Jiu-Jitsu to understand what happens when the fight goes to the ground.

So many people from different Brazilian Jiu-Jitsu schools came out to train and hang out together. We saw old training friends from other schools and made new rolling partners. At UMA, we believe that we have something to learn from everyone and every art. It was a great day of building community with our BJJ brothers and sisters from all over New York City! 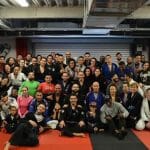