Welcome to U.M.A. Brooklyn – New York Mixed Martial Arts Facility
Find out what’s happening at
our training facility. Be inspired by your teammates.
Learn tips to level-up your training and your life.

Join us Saturday, May 13th for our free OPEN HOUSE!

Princess Yahmeela Aziza Serna is UMA’s Student of the Month for May 2017!
We want to highlight Princess because she was UMA’s very first student. 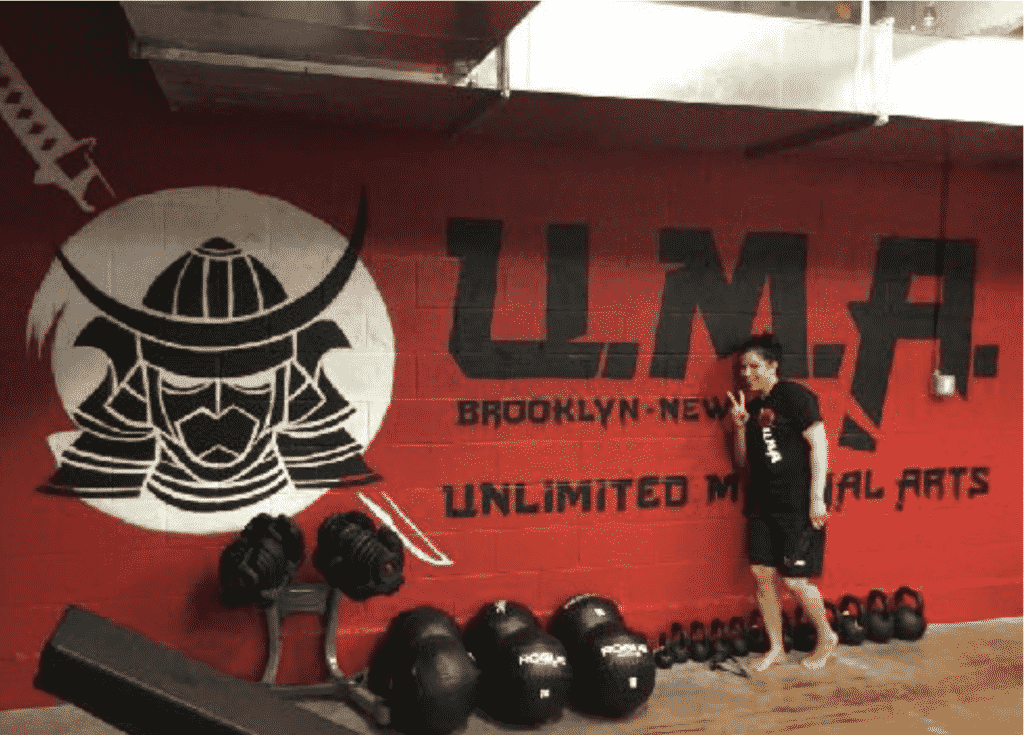 Here’s a little about her story, how she got into martial arts, and how she inspires us.

Princess is a technician, a professional tour guide, and an intern in various biochemical research opportunities at Hunter College in NYC. She started training martial arts 12 years ago, but her introduction to the arts was quite by chance. Her youngest brother, an avid Bruce Lee fan, wanted to find a school to train JKD, but he was too young at the time to go alone to the introductory classes. For one school, her brother couldn’t attend the intro class, so she called to cancel their appointment. She actually spoke to Phil Cruz, who convinced her to come down and try it out for herself. As she was waiting for her lesson, she noticed that there were many female students at a high skill level and at different ages; they seemed to respect and support each other. After her first lesson with Phil, she was sold. She has never looked back since.

Princess emphasizes that as a woman, joining a martial art school was unheard of in her religious family, as her father prohibited women to participate in what he considered male sports. Growing up, Princess used to watch her brothers train in karate and tae kwon do, while she was forced to stay home and do her homework. She often wished that her family would invest in her like they did her male siblings.

Princess attributes martial arts as the tool that helped liberate her from the oppressive and strict cultural and religious gender roles that she grew up with. She often wonders what her life and relationship with her father would be like if she had been able to practice martial arts at an earlier age.
Unfortunately, her father passed away years before he could witness the positive changes that martial arts made in her life.

Princess has been a student of Sifu Phil Cruz for 12 years and was ecstatic when Phil and Anthony opened up UMA in Brooklyn. She loves the flexibility of UMA’s schedule and accessibility of the studio located in the heart of Williamsburg. She is a consistent student often taking two to three classes back to back (“burning calories like crazy!” she claims). Most importantly, she feels that UMA offers a safe and respectful training environment for women. She’s observed that at other gyms, women feel like the target of unwanted sexual advances or feel pressure to fit into the dominant standards of beauty. UMA has been a welcoming and safe space for women to practice and grow as equal training partners.

Princess attributes martial arts to increasing her self-confidence. She’s lost sixty pounds and has been able to do physical activities that were previously impossible for her.

She’s also taken more risks in other areas of her life. She’s increased her hobbies to include sewing and pattern-making, photography, drawing, biking, and swimming.

She says that one of the most proudest moments of her life was when she used her skills to defend herself against an attack at a subway station near her home in the middle of the afternoon. She was also able to defend herself against a robber and then catch that person while she was injured with a broken foot! She encourages women to educate themselves in these skills to not only build self-esteem and courage, but because they can be applied to real-life dangerous situations that many women will experience within their lifetimes.

Her current training goals are to improve her understanding and delivering of JKD concepts. She encourages her fellow teammates to train safely and within their abilities to avoid injury and promote longevity. She also claims that the people she surrounds herself with in the gym and anywhere in life have greatly impacted her success. She feels that her teammates have held her accountable to her training and have helped stay the path to work towards her goals.

Princess is an inspiration and motivation to the women at UMA. She continually brings the women together to socialize outside of class and encourages them to challenge themselves during their training, but to always have a work-life balance. We are so proud she is a member of the UMA community!

In last month’s newsletter, we shared that the Kabuto, a helmet worn by ancient Japanese warriors, inspired the design of UMA’s awesome logo. This month, we want to share the story behind the evolution of the design. The logo has a special meaning to both Phil and Anthony, and they feel it truly
embodies the spirit of the school. 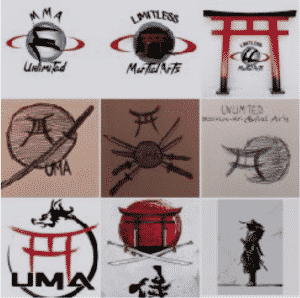 The very first sketches of the logo had a few key elements. Phil wanted the circular brush stroke because it symbolizes the “limitless” journey of the martial art path. Both Phil and Anthony always emphasize that even when you reach instructorship level, the process of learning and evolving is still never-ending. Anthony initially wanted the traditional Japanese gate, the torii, as part of the logo because his trip to Japan played a significant part in his own spiritual development. The torii gate is found at the entrance of Shinto Shrines in Japan and marks the boundary between the sacred and profane. Anthony wanted students to feel like they are crossing into a sacred place when they enter the school.

But the early versions of the design still didn’t feel right. Phil and Anthony agreed that there needed to be a more “martial” symbol in the logo. They tried incorporating a dragon, but felt that so many martial art schools already used that image. They considered using swords, but again, they wanted to differentiate themselves from other schools. When they discovered a picture of a Japanese Samurai, they felt that the spirit of the Samurai warrior and the Bushido honor code they lived by encompassed all aspects of what Phil and Anthony wanted to create and share at UMA. They feel that the martial art journey extends beyond learning a physical skill set. It includes cultivating a certain lifestyle and mindset that emphasizes virtues like honesty, compassion, courage, and honor. These are attributes that they seek to actively cultivate in themselves and their students. 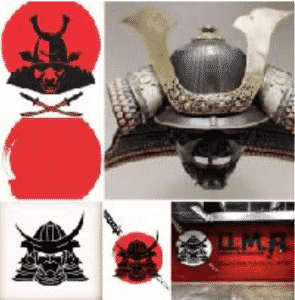 With the Samurai as the central idea, the design still went through a few iterations before they settled on the final version. Instead of depicting the full body of a warrior, they found an image of a traditional Japanese helmet,

the Kabuto, which really resonated with Phil. He says the helmet has a special meaning to him because he has always visualized “putting on a warrior’s mask” to help him get through difficult personal times. They decided to prioritize the Kabuto helmet as the forefront of the logo. The first draft of the Kabuto, a red circle in the background with two swords underneath, felt too ominous. They wanted the symbol to embody excellence and sincerity, not frighten people away.

Finally, the design evolved with all the important symbolic elements: a Kabuto helmet, circular brushstroke, and a Samurai sword. Even the

UMA lettering resembles a black belt, another reminder to students to aim for the highest goal. Stepping back and taking the UMA emblem as a whole, we can sense into the full message of what the UMA founders want to convey: pursue the highest level of your training with excellence and integrity in all parts of the path and know that the end is merely the beginning. As Anthony says in his quote on the website, “There is no race. There is no mountain top… We are beyond belts…We are the artists working on the masterpiece we call our soul.”

We hope you think about these insights every time you see the UMA logo! We can’t wait to share, learn, grow and evolve together as team here at UMA. Check back to this part of the newsletter, the Kabuto Corner, next month for more insights from the UMA instructors